“The U. S. Government believes in the importance of tourism as a driving force for increasing economic opportunities in BiH. Tourism is one of the fastest growing sectors in BiH and I strongly believe that there is much more room for growth. Our goal is to establish a Via Dinarica corridor, with three major trails – the White along the top, the Green in the middle, and the Blue Trails along the sea – as a community-owned and –operated tourism destination that provides sustainable livelihoods for a broad range of stakeholders”, said Ms. Maureen Cormack, the U.S. Ambassador to BiH.

“Opening of the White Trail marks a significant step towards developing Via Dinarica as an integrated tourism product that can contribute to human development and improving the quality of life for the people of Bosnia and Herzegovina”, said Ms. Sezin Sinanoglu, UNDP BiH Resident Representative.

"The opening of “White Trail” and " Via Dinarica" initiative represents a chance for presenting Bosnia and Herzegovina in a positive light, because tourism is one of the successful examples, which our country can proudly show at the regional as well as  international levels, particularly in the area of foreign trade and economic relations," said Mr. Mate Franjičević, Deputy Minister of Foreign Trade and Economic Relations BiH.

The Via Dinarica is a platform for sustainable development of tourism, which connects seven countries that encompass the Dinaric Alps mountain range: from Slovenia on the north toward Serbia, Kosovo and Albania on the south. The heart of this mega trail, similar to the Via Alpina and the Appalachian Trails, is in Bosnia and Herzegovina, Croatia and Montenegro.  The aim of this project is to establish the Via Dinarica corridor, with its three major trails – the White, the Green and the Blue Trails. The "White trail"  is the main path that extends the entire length of Via Dinarica, follows the natural flow of the highest peaks of the Dinarides and includes all the highest peaks in each of the seven countries. 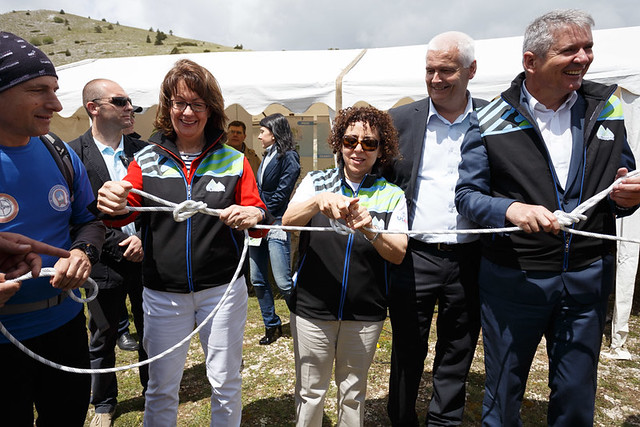