“It is noteworthy that, in the Vrbas Riber basin, there was not a single automatic hydrological station, and today’s project provided hydro-meteorological equipment worth BAM 500,000”, stated Srebrenka Golić, Minister of Spatial Planning, Civil Engineering and Ecology of Republika Srpska (RS).

The Mayor of Banja Luka, Slobodan Gavranović, explained why this network is significant for Banja Luka. “We should be enhancing this monitoring network and we should have the entire system interconnected so that, in the case of new disasters, the decision-makers can do in a timely manner whatever it takes to suffer the least possible damage. The data from the hydrological, rainfall and meteorological stations will be significant. We will be using the data for a number of assessments and it will be essential to have all information in one place.”

The map of rainfall, hydrological and meteorological stations in Vrbas river basin

“These stations collect data automatically which are then directly transmitted via GPS to the Hydro-Meteorological Institute where they are processed and entered into a database, and distributed further in accordance with the rules and laws,” explained Milenko Stanković, Dean of the Faculty of Architecture, Civil Engineering and Geodesy in Banja Luka.

Deputy Resident Representative of United Nations Development Programme (UNDP) in BiH, Zahira Virani, said that this is the first such system in Bosnia and Herzegovina. “We have 28 gauges in the Vrbas River basin, and this is a model that we would like to invest in having replicated in all other basins so as to implement a similar early warning system, which would serve as protection from floods.”

At today’s event, the students of the School of Natural Sciences and Mathematics and of the School of Architecture, Civil Engineering and Geodesy from Banja Luka had the opportunity to become better acquainted with the workings of the established hydro-meteorological network; how the new equipment operates, and how the data will be processed; which will help them in further studies.

The investment is worth BAM 500,000, and it is implemented within the project "Technology transfer for climate resilient flood management in Vrbas River Basin” which is implemented by the United Nations Development Programme (UNDP) in BiH, in partnership with the Ministry of Spatial Planning, Civil Engineering and Ecology of Republika Srpska. The project is funded by the Global Environment Facility (GEF) with the value of USD 5 million, and implemented by the UNDP. Project partners are: Ministry of Foreign Trade and Economic Relations of BiH, Ministry of Spatial Planning, Civil Engineering and Ecology of RS, Ministry of Agriculture, Water Management and Forestry of FBiH, Ministry of Agriculture, Forestry and Water Management of RS. 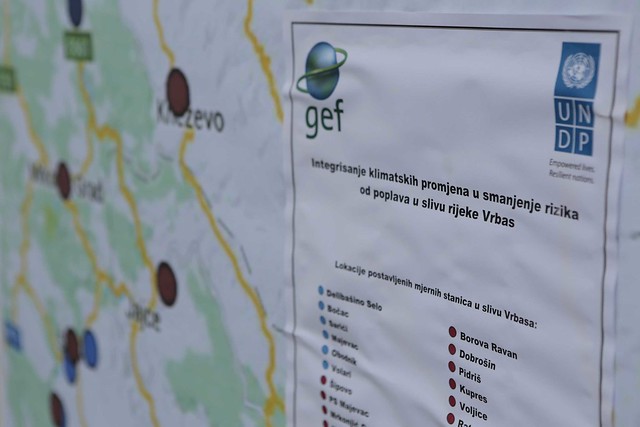